This is the final in my four part series on basic income. In Part 3, I highlighted potential impacts of  different basic income options on the labour market and social security system.  This demonstrated that basic income schemes can have adverse unintended consequences, especially for low paid workers.  In this final Part 4, I examine three possible responses to these dilemmas:

(3) a set of smaller Supplements to meet particular costs.

These could be combined to form a two-tier Basic Income scheme with a base rate of payment to meet general living costs and a supplementary tier to meet additional costs.

The most comprehensive proposal for a Basic Living Income in Australia comes from the Australian Council of Social Service (ACOSS). It advocates replacing the pension and allowance payments for people of working age with a single basic payment (with different rates for singles and couples).

The payment level would be set to meet the full minimum living costs of a single adult or couple. In setting payment rates, the government would be advised by a statutory expert Social Security Commission which would undertake research on living costs for people with low incomes and report regularly to Parliament. The Age Pension and Family payments would remain in place. Rates of payment would be indexed to wage movements and consumer prices, and the payment would be income-tested.

In this way, the present income support system for adults of working age would be converted from a hodge-podge of payments with different rates and eligibility requirements into a form of Basic Living Income or minimum income guarantee.

This is not a new idea. When the Whitlam government was elected, Social Security Minister Hayden announced that:

‘The New Labour Government hopes to completely scrap the present confusing system of pension and social security benefits and replace it with a more simply administered and easily understood system of guaranteed income.’ (Hayden 1973)

A key issue is the extent to which a Basic Living Income should be conditional. Should activity requirements such as job search or training apply? On what basis people should be exempted from them (e.g. disability or caring roles)?

This raises issues of reciprocity: what (if anything) should people be expected to do in return for a living income from the State?

“Modern social welfare has really to be thought of as ‘help given to the stranger, not to the person who by reason of personal bond commands it without asking’ [citing Wilensky & Lebeaux (1958)]. It has therefore, to be formally organised, to be administered by strangers, and to be paid for collectively by strangers.” (In Abel-Smith & Titmuss 1987, p85)

An impartial, rights-based approach is what distinguishes social security from charity. The entitlements to this ‘support from strangers’ rest on a combination of political and institutional power (the balance of interests represented in Parliament) and a supportive ideology based on social solidarity and reciprocity among recipients and taxpayers – who are ultimately the same people. We see this every year in the ebb and flow of federal budget debate on social security.

Conditionality has many variants, from the Poor Law system of punishment for the ‘undeserving’ (virtually everyone except older people and those with a disability) to the Nordic ‘active line’ in which employed and unemployed workers are expected to ‘do your duty and demand your rights’ (Dølvik et al 2015). Expectations of what government will provide range from unpaid work for benefits in Australia’s ‘Work for the Dole’ scheme to a right to employment and training programs, as well as benefits, in Denmark (Kvist 2007).

The purpose of activity requirements has been to promote self-reliance through job search and participation in employment and training programs. The risk, as discussed in Part 2 is that those requirements become so demanding and so out of touch with people’s actual employment prospects that they become a form of punishment.

In recent years, a ‘new paternalism’ has taken hold in social security policy, which takes activity requirements a step further. It aims to curb what it calls ‘welfare dependency’ by regulating the social behaviour of recipients of income support. New paternalists call for drug tests and compulsory treatment, good parenting requirements and restrictions on how people spend benefits such as ‘income management’ of benefits by Centrelink or ‘cashless welfare cards’ that ban spending on drugs or alcohol.

This is a slippery slope towards a new category of second-class citizen. People receiving working–age social security payments are increasingly expected not only to make reasonable efforts to attain financial self-reliance, but also to accept invasions of privacy and behavioral restrictions that in the past may only applied to people convicted by the courts of serious offences. Predictably and regrettably, in Australia, the first group singled out for this treatment have been people in Aboriginal and Torres Strait Island communities, who weren’t even granted citizenship until about 50 years ago.

A Basic Living Income could be paid unconditionally or the range of justifications for payment could be broadened as Atkinson (1996) proposed with his ‘Participation Income’, to include unemployment, disability, education and training, and parenting and other caring roles. The Australian social security system does this already in its own parsimonious way. Parenting Payment supports the primary carers of children, but only for preschoolers. Youth Allowance and Austudy Payment support full-time study, but are deliberately paid at a lower rate than Newstart Allowance.

To adapt the system to present-day conditions and needs, we could broaden these definitions, extend eligibility to more people and pay all at the same rate based on need.

In Part 3, I discussed how supplementing low pay and insecure work with a small universal payment could have adverse unintended effects. Yet unemployment, low pay and inadequate or insecure paid working hours are not the only income risks people face through life. In addition to a Basic Living Income, there is a role for ‘life cycle’ payments to cushion people’s incomes as they undergo other changes in their lives that put their incomes at risk.

The two biggest life-course income risks most people face are the costs of children and supporting ourselves in old age. Australia’s social security system recognizes these risks through family payments (Family Tax Benefits A and B) and the Age Pension. As it is recognized that most of us face these risks and these payments are not income-tested as strictly as income support for people of working age. In 2014, 60% of families with a child under 16 years received a family payment and in 2016, 66% of people over 64 years received an Age Pension, compared with just 18% of people of working age receiving income support in 2015.

This chink in the armour of Australia’s defenses against so-called ‘middle class welfare’ is well justified (Henderson & Spies-Butcher 2017). Most countries provide some form of social insurance against these risks. Whether these payments should be more loosely income-tested depends on our priorities for the federal budget. If we ‘target’ them to such a degree that less than half the eligible population is entitled to full or part-payment (and we may be approaching this benchmark with FTB, with the tightening of income tests after 2014), then we have probably gone too far.

There is also a strong case for smaller supplementary payments to meet non-discretionary costs above the basic living expenses that we all face. Examples include Rent Assistance (for low income households renting privately), Carer Allowance (to assist carers of people with disabilities with the costs of care), and proposals for a costs of disability allowance to assist with the direct costs of a disability (ACOSS 2014).

Since these costs exist whether a person is unemployed or in paid work, there is a strong (and publicly supportable) argument for broadly-based public support to meet them. Another advantage of supplements is that they are less likely to be viewed by employers, governments or Fair Work Commission as de facto wage subsidies because not all employees would receive them. This is one way around the risk of triggering a ‘race to the bottom’ on wages.

A guarantee of a Basic Living Income to provide income security for all is a hallmark of a good society. Australia’s current social security system fails to achieve this.

On the face of it, the Australian system is a long way removed from proposals for universal Basic Income. Indeed, it is more strictly income-tested than any other wealthy OECD country (Whiteford 2016). Yet the design of Australia’s system, being based on need, means that it comes closer to Basic Income principles than other wealthy countries where payments are based on the insurance principle and linked to the previous income of the recipient. This is important for those at greatest risk of poverty, including people with disabilities and women who have spent years out of paid work while caring for children.

Support for a Basic Income is weakest in those European countries with robust social insurance systems such as the Nordic countries, as shown in Figure 2. In countries with ‘Beveridgean’ social security systems like the United Kingdom, people are more supportive of the idea of a basic minimum income for all. This suggests that popular support for a need-based Basic Living Income might be stronger in Australia than in most OECD countries, but that our preference for means-testing means that universal payments are more likely to be resisted. 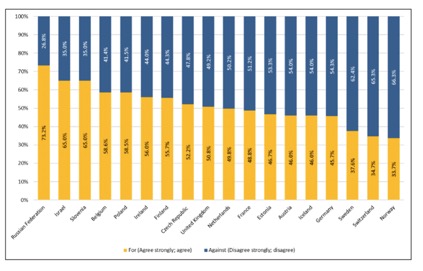 At its best, the Australian social policy tradition offers support based on need and the redistribution of resources to reduce poverty and social inequality. At its worst, it applies an outdated Poor Law distinction between ‘deserving’ and ‘undeserving’ recipients and punishes the undeserving with increasingly intrusive and unrealistic activity requirements. Our ‘liberal welfare regime’ (Esping Andersen 1999) means that adequate income support is too often regarded as a last resort to be offered reluctantly and sparingly, to discourage so-called ‘welfare dependency’.

John Quiggin’s argument that we should give more weight to the ‘Basic’ than the ‘Universal’ in Basic Income schemes makes sense. A Basic Living Income would give priority to those in most need of support, and reduce the risk that they end up with lower social security payments or lower wages as an unintended consequence of reform. This suggests two directions for reform:

First, we should do away with the distinction between pension and allowance payments for people of working age and replace both with a means-tested Basic Living Income scheme.

Secondly, the system should reach beyond those at immediate risk of poverty to assist low and middle income earners to negotiate life-cycle risks such as the costs of children and retirement, and provide supplements to meet unavoidable costs above and beyond the basic expenses faced by everyone. How strictly these lifecycle and supplemental payments should be income-tested is a pragmatic question of budget priorities.

The social minimum is about much more than social security legislation. Income security for all requires full employment, decent hourly wages, adequate and secure paid working hours, and a strong foundation of support services including employment assistance, lifelong education and training and child and elder care. A decent basic income, full employment and a welfare state are complementary, each supporting the other.

This four part series is written based on the presentation, ‘From basic income to poor law and back again: can a UBI break the Gordian Knot between social security and waged labour?’, by Peter Davidson at the Australian Social Policy Conference at UNSW on 27 September 2017.

It is serialised on this site, and on the Austaxpolicy blog, at: Davidson, Peter (2018), From Basic Income to Poor Law and Back Again – Part 4: Designing a Viable Basic Income,  Austaxpolicy: Tax and Transfer Policy Blog,  22 March 2018, Available from: http://www.austaxpolicy.com/basic-income-poor-law-back-part-4-designing-viable-basic-income/