The Welfare Review Report has finally been released. It advocates a  “new flexible social support system that is simpler, sustainable, coherent and outcomes focused”.

Sounds good, and a welcome change of tone from last year’s Budget. But unscrambling this egg is not as simple as it sounds, and nor is the recommended payment structure.

Most of the ’20 existing income support payments’ are actually sub-categories of three basic payments: pensions for people’ unable to work’, Allowances for people ‘able to work’ and student payments. The sub-categories relate to different population groups within each of the three payment types (e.g. sole parents, people with disabilities, unemployed people). These sub-categories play an important role: to identify limitations on people’s paid workforce participation (e.g. caring roles) in order to decide what range of activity requirements (if any) should apply. If they didn’t exist they would have to be invented.

The real flaw in the present payment structure

Most of the complexity and unfairness in the present system comes not from the population categories but from the division into the three different basic payment levels outlined above: pensions, allowances and student payments. The figure at left, from the ACOSS Welfare Review submission, shows that we have at least two distinct social security systems: pensions and allowances (student payments are included in the ‘Allowances’ box on the right), each with its own eligibility conditions, payment rates and income tests and activity requirements.

The old divide between pensions, allowances and student payments is based, not on financial need, but on outdated notions of ‘deservingness’ and ‘ability to work’. For example, people with disability are paid a pension because it’s assumed they won’t find paid employment and ‘deserve a pension’ – not because their financial needs are greater (which is a much better argument for higher payments for people with disabilities). 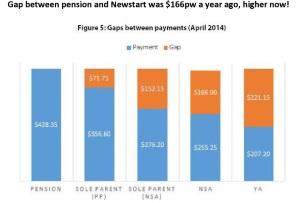 Over time – especially after 2009 when pensions were increased but allowances were not – the gaps between payment rates have widened (see yellow bars in the graph at left). Unemployed people are paid the $36 a day Newstart Allowance because it’s assumed they might find a job tomorrow (even though the average time on that payment is 108 weeks!)

It turns out that the lowest payments go to the people in greatest financial hardship : Newstart Allowance and Parenting Payment, closely followed by DSP recipients (see graph at left).

If it’s bad for equity, the pension:allowance divide is also bad for work incentives. The closer people come to paid employment, the lower their payment. If I have a disability and am assessed as ‘able to work’, I drop from the DSP to the much lower Newstart Allowance. People on pension payments fear the loss of income security that dropping down to Newstart Allowance entails.

The Review acknowledges these payment anomalies, which worsened in 2009 when pensions were increased but Newstart and student payments remained the same.

Yet when the Review’s proposals are unpacked, we find that at least one additional payment level would be introduced. The proposed ‘tiered working age payment’ has three different payment levels based on ‘ability to work’. So in place of  three basic payment levels (three-and-a-half if we include the higher Newstart rate for sole parents) we would have four: the first tier, second tier and third tier of the new Working Age Payment (WAP), and pensions for carers and (some) people with disabilities. Is this simpler?

The Review side-steps proposals, advanced by ACOSS and others (and the original ‘McClure Report’ in 2001), that levels of payment (base rates and supplements such as a cost of disability supplement) should be determined on financial need rather than work capacity:

“A number of stakeholders suggested simplifying the payment system with a single base payment for people of working age, including all those with disability. This single base payment would be based on an assumption of a person’s current financial needs and not include consideration of capacity to work, now or in the future.  A single payment system does not recognise the varying capacities of individuals to work. “

So instead of abandoning the old idea of different levels of payment based on work capacity (and whether people’s need for income support is likely to be ‘short term’ or ‘long term’), it proposes to refine it:

“There are some people who, because of severe disability, are not expected to work and as a result are likely to spend long periods of time on income support with no potential to supplement this support with earnings. This group will receive the Supported Living Pension.

For other people receiving income support, there is an expectation of work. A payment is needed that reflects the expectation that now or in the future people will be capable of some level of workforce participation. However, within this group, there are varying needs and capacities to work. Different tiers and rates are needed to reflect this diversity. These groups will receive the tiered Working Age Payment.”

The same argument is applied to parents and carers. Ironically for parents, this implies higher rates of payment when children are young (and parents are less likely to seek paid work), yet as the Review argues the costs of children rise with age. This is one of the many tensions between payments levels based on financial need and work capacity.

This is where the problems begin. By dividing people according to ‘work capacity’ the Review proposes that we should continue to ‘second guess’ people’s future work prospects and need for long-term income support.

For example in the proposed ‘tiered’ payment system people with disabilities would be divided (by the magic of work capacity assessments) into four groups receiving different levels of payment:

Is this feasible? Is it fair? The Report’s own data suggest that these days people spend a lot of time on so-called ‘short-term’ payments like Newstart Allowance even without disabilities or caring roles:

And in the case of carers moving off the Carer Payment (a pension payment):

“Around 78.6 per cent of carers who exited from Carer Payment (before Age Pension age) in 2011 received further income support, such as Newstart Allowance, at some stage prior to March 2014”

It’s hard to escape the conclusion that the Review wants to fine-tune a flawed payment structure –  to add a few new strings to a broken guitar and hope that it plays.

If the Review’s proposals were implemented, depending on your starting point in the present system, you could gain or lose. The graph below compares existing payment levels (first three bars) with the proposed system (next four bars) – note that the Review does not specify what the new payment levels should be so we can’t be certain of the outcomes.

By further restricting access to the higher ‘pension’ payments (there would be no Parenting Payment for new applicants and the ‘Supported living allowance’ would be much harder to claim than the DSP), the Review continues a long policy trend of diverting people from higher to lower payments that began in earnest with the ‘Welfare to Work’ policy in 2007.

“During the consultations, many stakeholders raised concerns about the adequacy of allowances. In particular, stakeholders pointed to the increasing gap between pensions and allowances.”

Is there a better alternative? 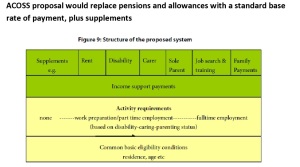 In its submission to the Review, ACOSS proposed replacing pensions allowances and student payments for people of working age with a ‘base rate and supplements’ model of income support in which payment levels are based solely on financial need, not work capacity. Here’s what the proposed structure would look like (at left, also from the ACOSS submission).

It turns out that people with disabilities, sole parents and carers do need higher payments – not because of a supposed ‘inability to work’, but because they face higher costs (the costs of disability and care). Those costs would be explicitly acknowledged in the proposed system.

People with disabilities, for example, would receive the same base rate of payment as other social security recipients plus a supplement to assist with the costs of disability, which they would keep if they moved into a job paying a modest wage. 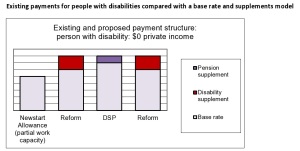 The graph at left illustrates how this ‘base rate and supplements’ model (with a costs of disability supplement) would affect social security payments for people with a ‘partial work capacity’ (the two bars at left) and those presently entitled to the DSP (the two bars at the right). Those on Newstart Allowance would GAIN (red bar at left) and those on DSP would receive the same level of payment (comparing total incomes in the two bars at right), unless they secure employment in which case the Disability Supplement would leave them better off than under the present system, improving work incentives.

Work capacity assessments (and population based categories such as disability, carer, and parenting) would still be needed to determine whether activity requirements should apply (to give people a degree of certainty about the range of requirements that might apply to them if they have a disability or caring roles). But they would not determine payment levels.

Not a simple system, but much simpler and fairer, and better for work incentives, than the labyrinth we now call a social security system.

2 thoughts on “Not as simple as it sounds: The Welfare Review in pictures”