Indexation of social security payments is a dry subject. Does it really matter if they’re indexed to MTAWE or CPI? You bet! The Government’s budget proposals to index pensions only to the CPI and not to wages would reduce them by $80pw in a decade compared with present indexation, and save a motza. The Rudd Government’s decision in 2009 to index family payments to CPI instead if wages has saved over $1B and has already cost a low income family with 2 children under 13 years $19pw. If Newstart Allowance had been indexed to wages as well as the CPI over the last 20 years, it would now be $115pw higher ($52 instead of $36 a day).

Currently, pensions (including the Age Pension, Service Pension, Disability Support Pension and Carer Payment) are indexed twice each year by the greater of the movement in the Consumer Price Index (CPI) or the Pensioner and Beneficiary Living Cost Index (PBLCI). This is designed to keep pace with increases in the cost of living.

From time to time the base rate of the pension is also adjusted upwards to bring the maximum single rate up to a ‘benchmark’ of 27.7% of Male Total Average Weekly Earnings (MTAWE). This is designed to keep pace with community living standards. The Parenting Payment for sole parents is set at the lower level of 25% of MTAWE.

Looking forward: what will happen to pensions if they’re only indexed to the CPI?

Pensions play a vital role in preventing poverty. According to ACOSS’s ‘Poverty in Australia’ report, in 2012 13% of older people (over 64 years), 45% of sole parents on Parenting Payment, and 42% of people with disabilities on the DSP, lived below the poverty line.  It would be a lot higher without the pensions to provide a safety net for those with no other source of income.

One of the most controversial policies announced in the 2014 Federal Budget was to index pensions to the CPI only from 2017, instead of both CPI and wages. The Government says pensions won’t be cut. Whether this is accurate depends whether this means means cutting the future spending power of the pension (in which case it’s not a cut) or cutting future payments compared with what people would have received under the present law (in which case it’s a cut). It sure looks like a cut to me – if not, then why does the Inter-generational Report estimate the Government would save over $40 billion a year (in current dollars) from this policy, together with the proposed increase in the pension age, in 40 years’ time?

We can see more clearly what impact indexing pensions to the CPI and not wages would have on future pensions from the following graph from the National Commission of Audit Report. 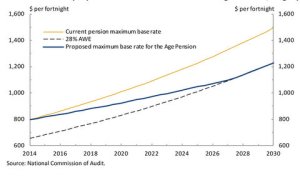 The maximum rate of the single pension under current policy (indexation to CPI and wages) is shown in the top (yellow) line. The second (blue) line shows the value of the pension if it is only indexed to the CPI up until 2027. The gap between the lines show how much pensioners would lose. In 2024 (a decade from 2014 when the Audit Report was prepared) the cut amounts to $80 per week. 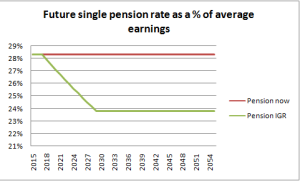 Not surprisingly, the Senate has other ideas. It has refused to pass this legislation, and the link between pensions and wages remains in place for now.

Looking back: What happened to pensions, NSA and family payments over 20 years?

The link between pensions and wage increases has been bipartisan policy for many years. The Whitlam Government set the single pension rate at 25% of MTAWE. The Howard Government put this into legislation in 1997. A decade later in 2007 the Rudd Government raised the benchmark to 27.7% of MTAWE (an increase above inflation of $32pw at the time). The 2014 Budget broke with that tradition.

To see what happens when payments are indexed differently,  let’s look back at social security payment levels over the last 20 years from 1994 to 2014. To set the scene, this graph compares movements in the CPI and MTAWE over that period.

Average wages have risen strongly over the last two decades of solid economic growth, by around 2.5% above the annual inflation rate (CPI). This means that ‘real’ living standards of average wage earners have risen by about that amount each year. It’s obvious that if social security payments are indexed to the CPI only and not wages, their recipients will not share in future increases in the community living standards. Their living standards will be frozen in time. Wages are now growing more slowly, but in the long run we’d expect them to rise each year by about 1.5% to 2% above inflation.

The graph below shows rates of pensions, fortnightly Family Tax Benefit Part A fortnightly payments (FTBA) for 2 children under 13 years, and Newstart Allowance (NSA) since 1994. Rates are expressed in 2014 dollars (removing the effects of inflation). Only pensions have risen consistently above inflation – because they were indexed to wage movements and then increased further in 2009 (that would change if the 2014 Budget proposal become law). NSA flat-lined (apart from a small rise in 2000 to compensate for the GST). FTBA rose strongly in 2000 and flat-lined after that. 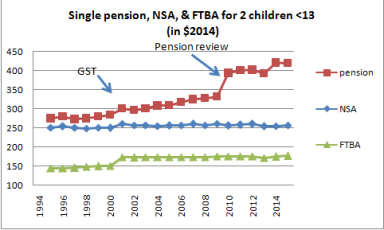 Gaps between pensions and other payments increased dramatically over this period. Living standards for pensioners rose (though the pension is still frugal) while those of low income families and unemployed people without any other source of income froze.

How did this happen?

Family Tax Benefit Part A (formerly Family Allowance) plays a vital role in staving off poverty among children. In 2012, according to ACOSS, 17% of children live below the poverty line. Most are in families reliant on social security and family payments, and about half are in sole parent families.

In 1988, the Hawke Government committed to reducing (actually, “ending”) child poverty. It proposed to do this by dramatically increasing family payments for the poorest families – both jobless and in low paid work.

The policy didn’t end child poverty but it did reduce it by one third: one of proudest social policy achievements of the Hawke Government.

As with pensions, this increase was made by linking (benchmarking) family payments to wages. So the maximum rate of family payments for a low income family could not be less than 16.6% of the pension rate for a married couple for each child under 13 or 21.6% for each child aged 13-15 years. Since pensions were linked to wages, family payments were also linked for the first time to wage movements. These benchmarks were also a bi-partisan commitment. They were retained by the Howard Government.

In 2000, family payments were increased substantially – above what was needed to compensate for the GST. As a result FTBA was above the benchmarks until 2008, and no further increases above inflation were awarded despite rises in pensions and wages from 2000 to 2008.

Then in 2009, the Rudd Government cut the link between Family Tax Benefit Part A and wages, so from then on it was only indexed to the CPI. This was announced at the same time as the increase in pensions, so this was a ‘saving’ (at the expense of low-income families) to pay for higher pensions. By 2013, the annual saving to the Budget was estimated to reach $500M.

Since sole parents were excluded from the 2009 pension increase (see above), this means they lost out in two ways. Their pensions were not increased, and their family payments are now lower than they would have been. Three years later the Gillard Government shifted many sole parents off the higher pension payment onto the lower Newstart Allowance – a typical payment loss of $60pw. At this time 25% of sole parent families lived below the poverty line.

So, just as low-income families were about to receive an increase in payments above inflation under the rules introduced by the Hawke Government and retained by the Howard Government, they were denied it by the Rudd Government. FTBA payments have not risen since in real terms, except under the Gillard Government’s ‘Clean Energy’ package to compensate for the carbon price.

By comparing movements in the CPI and MTAWE, we can work out how much low income families lost between 2009 and 2014 as a result of the removal of indexation of family payments to wages. A family with two children under 13 has lost around $19pw. It is inevitable that if family payments for low income families are not increased above the CPI, child poverty as it is usually measured (i.e. in relation to community living standards) will increase.

Unlike pensions and family payments, Newstart Allowance for unemployed people has never been indexed to wages, though the Whitlam Government did raise Unemployment Benefits to the pension level and the Hawke Government committed to restoring that link. Unemployed people have always been at the bottom of the social security pecking order.

Newstart Allowance is a good example of what happens to payments, and living standards, if they are only indexed to the CPI for a long time. It’s not a pretty sight. Living standards for recipients are frozen in time to 1994 (the last increase above inflation), when the internet was in its infancy. Newstart Allowance for a single adult is just $37 a day, nowhere near enough to meet basic living costs. If NSA had been indexed to average wages as well as the CPI, it would now be $115pw higher.

What should have happened

Now let’s see what would have happened to payment levels over the last two decades if NSA and family payments were indexed to wages consistently as pensions were, and if unemployed people received the same one-off increase granted to pensioners in 2009. 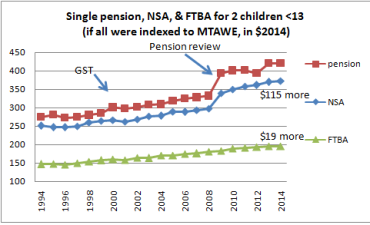 Newstart Allowance would have been $115pw higher and Family Tax Benefits for a family with two children under 13 would have been $19pw more (to show the impact of indexation to wages, the year 2000 increase in FTBA is removed – that payment would still be higher by 2014).

2 thoughts on “Racing against time: indexation of social security payments”